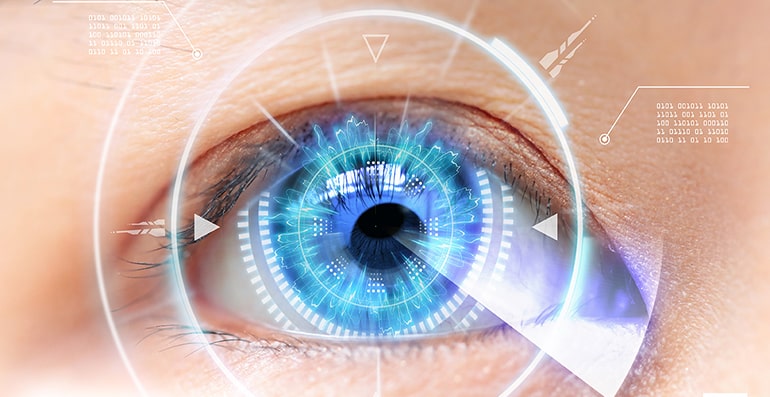 More and more people are choosing Refractive Lens Exchange (RLE) in order to improve their life quality, more than 50 million intraocular lenses have been implanted throughout the world. The RLE is ideal for patients whose lens is unable to focus properly to produce clear vision without visual aids (glasses or contact lenses) or also to avoid undergoing a Cataract surgery later on. The RLE concerns the myopic and strong hyperopic, those who cannot benefit from LASIK or a phakic implant.

For refractive lens replacement, the natural lens stiffened and often worned by old age is removed and replaced by a new artificial lens. The method is essentially the same than for the cataract procedures. But unlike cataract surgery, this is not a disease in the true sense of the term.

The price of a Refractive Lens Exchange (RLE) in Tunisia coupled with a week of recovery or vacation in a 5 stars hotel is at least % cheaper than the sole procedure in Europe and for the same medical quality.

There are three types of Intraocular Lens, also known as IOL, used also in the cataract surgery to exchange the natural lens, depending on the visual needs and the health of the patient's eyes.

How is RLE surgery performed

Before the surgery the doctor will do a specular microscopy to ensure that the cornea can withstand the surgery in addition to a measure of the power of the implant by IOL Master and all the different healtch verifications.

The patient is locally anesthetized by special drops that make the eye insensitive to pain and other drops to dilate the patient's pupils. Indeed, they remain awake and lucid during the whole procedure. Whereas for the upper and lower eyelids, they are retained during the RLE intervention by a small spring or eyelid retractor. This cause eye drying, so a wetting liquid is regularly spilled on the surface of the eye.

After local anesthesia, the doctor makes a very thin cut of less than 2 mm on the cornea edge which allows access to the lens in the eye. Through this opening, the surgeon removes the crystalline from the natural lens by using an ultrasound technology. This process is called phaco-emulsification.

The lens capsule remains preserved, surrounds the eye lens in a protective manner and thus serves the next step as a support for the new artificial lens. Indeed, the surgeon inserts an artificial lens calculated exactly according to the vision defect. It is put by being folded. Therefore, the cut on the cornea edge can remain very small and the lens unfolds itself into the capsule bag and moves to the appropriate position.

By small flexible arches, the artificial lens is retained in the capsule bag and settled in the same place as the old lens before. The process is so soft that the tiny cut should not be sutured. It encloses itself, like a valve, without forming scars. In general, the procedure is carried out in less than 10 minutes.

The operated eye is covered with an ointment bandage. 48 hours after the procedure, the ointment bandage will be removed to examine the eye (a second examination is done 6 months after the procedure). The patient must take the medication as prescribed by the doctor. Besides, the first days after the RLE, the patient will observe a noticeable improvement in their visual acuity. But first, visual acuity is reduced for a short time by the eye's irritated state, so it takes a little longer to reach the final visual acuity.

This technique offers now a precise correction of particularly important vision defects. Indeed, it offers an opportunity to treat myopia and especially hyperopia.

The artificial intraocular lens is a permanent replacement for the natural lens and is designed to last for a long time. Thanks to the refractive lens exchange technique, the natural lens stiffened and often worn by age is removed and replaced by a new artificial lens. As a result, the refractive error is corrected and the patient will get a sharper focus by reducing the need to wear glasses or bifocals to read.

Advices before and after refractive lens exchange surgery

Before the intervention, the surgeon will examine the patient in order to determine the correct thickness of the new lens and to check the patients' state of health and eye conditions. It is important not to eat 6 hours before and not to drink 2 hours before the procedure. After a refractive lens exchange, it is important not to rub the eye, not spray the face with water and not to put the eyes in contact with soap during the first days. Physical efforts and sport are possible after about 3 days. While, driving of a car is only permitted after the doctor's consent.