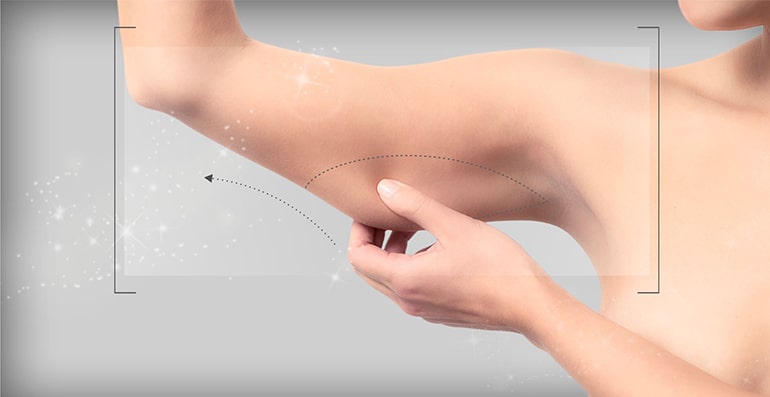 Particularly affected by gravity, the arms are among the most difficult body parts to maintain their firmness and tonicity. Physical activity, combined with a healthy diet, can help strengthen the arms to a certain extent. But in case of fat infiltration, or severe sagging skin, toning the muscle cannot be enough to obtain shaped arms. As such, the arm lift, also called "brachial lift" or "brachioplasty", is a highly effective solution to remove the unsightly appearance of this slackening skin and significantly improve the appearance of the silhouette while eliminating the functional discomfort associated with it.

The arm lift surgery is a common procedure that is performed for aesthetic reasons, it is used to reshape the arms and give them a more aesthetic appearance by focusing on the arm inside's contour. Brachioplasty is often combined with a liposculpture that involves removing fat accumulations. The interest behind the arms ptosis correction is to be able to expose the arms or to move them more easily.

It should be noted that people considering brachioplasty should be in good health and without medical conditions that could affect healing or increase postoperative complications.

The price of an arms lift in Tunisia coupled with a week of recovery or vacation in a 5 stars hotel with Cosmetica Travel is at least 67% cheaper than the sole procedure in Europe and for the same medical quality.

These cosmetic sugery prices include :

How is brachioplasty performed ?

An arms lift associated with an arms liposuction lasts between an hour and an hour and a half depending on the technique used and excess skin and fat to remove. The surgeon begins by drawing marks on the elbows, arms and underarms that will serve as indications for the incisions required. The incisions will be hidden in the inner part of the arms. Regarding the liposuction, it can be added to eliminate excess fat if the patient suffers from fat surplus . The intervention has two phases; The first one is the fat aspiration, also called "arms liposuction" which targets both fat deposits on the inner and outer side of the arm. With regard to the second phase, it consists on removing the excess skin known as "arm dermolipectomy".

Brachioplasty surgery can be done using several techniques according to the size, the scar's position and the incision's type. There are three main techniques.

Arm lift with longitudinal incision along the inner arm: in cases of significant excess and to remedy the aesthetic and functional discomfort of the arm.

Combination of the two techniques: the surgeon can combine the two processes each with advantages (correction both in the vertical and transverse plane) and disadvantages including the scarring. This method will result a horizontal incision in the axilla and a longer vertical scar in the inner arm.

At the end of the procedure, the surgeon stitches up the incisions and places a dressing, sticky elastic bands, or a compression garment.

Like any surgery, a brachioplasty leaves a scar. Indeed, the latter will depend on the method used as mentioned above. Nevertheless, the arm lift intervention will enhance the upper arm contour, while the final scar aspect is noticeable approximately one year after the arm lift procedure. So, patients should protect their arm scar from UV exposure and apply total screen SPF50 in order to avoid skin discoloration.

After arm lift surgery, bruises and edema may appear, but will disappear within 2 weeks. The patient can experience a feeling of discomfort such as tightness and aches, slings and a slight slenderness can also appear, but they will quickly be calmed down with simple analgesics. Besides, the patient should avoid any physical effort during the first month. It is recommended to take 7 days off for better recovery. Furthermore, it is essential to avoid any exposure of the arms to the sun during the first 6 months, to ensure proper scar healing.

Result and outcome after a brachioplasty surgery

The result is visible immediately, but it will take about 6 to 12 months to notice the final result, the required time for the scars to mature. The arms' shape is improved thanks to the arms lift surgery, thus allowing a significant physical and psychological comfort. The arms regain their natural shape and elasticity; no more friction against the bust, especially after a brachioplasty with vertical incisions. As a consequence, the patient benefits from a tight arm skin with firmer and younger appearance. Moreover, this procedure is relatively simple and fast to perform.

Advices before and after upper arm lift surgery

The patient should maintain a stable weight before the brachioplasty procedure. It is forbidden to consume tobacco at least one month before and one month after the procedure, so to avoid any problem during the healing process and reduce the risk of skin necrosis. Besides, it is essential not to take medication containing aspirin during the ten days preceding the upper arm lift surgery.

The patient should follow the surgeon's instructions in order to achieve optimal healing; taking anticoagulants for 15 days and wearing a compression garment for 3 weeks. Furthermore, it is recommended to apply moisturizing creams to avoid the arms' skin from drying.