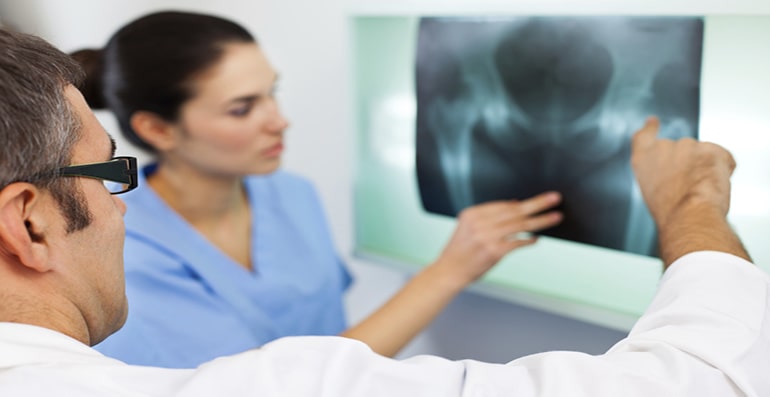 The hip is one of the big bearing joints of the body. This articulation allows walking but it also supports the weight of the body. The hip provides mobility of the leg and stability of the pelvis on the lower limbs. When there is a deterioration of the joint, most often because of osteoarthritis, the problems appear: pain, a decrease of the mobility of the hip, a difficulty to walk .... Over the last twenty five years, major advancements in hip replacement have greatly improved the outcome of the surgery. Hip replacement surgery is becoming more and more common as the population of the world begins to age.

What Is a Hip Replacement?

Arthroplasty refers to the surgical procedure of replacing part or all of a painful and / or non-functional joint with a prosthesis. Hip replacement also known as arthroplasty is the most frequently performed orthopedic surgery. It consists of replacing the hip with a total hip prosthesis (THA). This is composed of several elements: a cup attached to the socket (articular surface on the side of the pelvis) and an artificial metal fixed in the femoral with a head.

Who Should Have Hip Replacement Surgery?

The best candidates for hip replacement surgery are those who suffer from hip joint damage, which impedes their daily life activities. Osteoarthritis is the most common cause of this type of damage. Moreover, there are other situation where people should consider a hip replacement surgery such as that need such as rheumatoid arthritis, osteonecrosis characterized by bone death due to insufficient blood supply, injury, and bone tumors.

Hip replacement procedure was recommended for people over 60 years old since their movements and activities are reduced than younger people. But, nowadays, doctors figured out that hip replacement can be very effective in younger persons. In fact, medical advances have developed the artificial parts, allowing them to maintain more weight and stress, and last much longer.

Furthermore, hip replacement surgery success depends the most on the person's overall health and physical activity level rather than the person's age. This procedure is not recommended for people suffering from chronic disorders such as Parkinson's disease, serious muscle weakness, poor health condition. In addition, people who have high risks for infections are less likely to recover quickly and successfully, are not good candidates for hip replacement intervention. Moreover, it is advised to consider this surgery before advanced joint damage because the patient will recover more easily with better results.

The hip corresponds to the coxo-femoral articulation that is to say to the articulation between the femur, thigh bone, and the pelvic bone. The femur, a long bone of the thigh, is composed of a head and a collar at the level of its upper part. This head is articulated in the acetabulum, articular cavity of the hip bone. The head of the femur and the cavity of the coxal bone are covered with a cartilage about 3mm thick. The acetabulum is also surrounded by fibrocartilage, the acetabular labrum.

Hundreds of hip replacement surgeries have been performed in Tunisia and this operation has an excellent safety record. Hereinafter the most important steps in the intervention:

The Artificial Hip Joint is called a prosthesis

There are two main types of artificial hip joint:

Both types are widely used. The type of prosthesis used for your surgery is usually decided upon by your surgeon based on your age, your lifestyle, and the surgeon's past experience.

Each prosthesis is made up of two parts:

The femoral component consists of a metal stem with a metal ball on the end. But, some prosthesis are made up of ceramic ball attached to the metal stem. The acetabular component (image) is a metal shell with a plastic inner socket liner that acts like a bearing. The type of plastic used is very tough and very slick - so slick and tough that you could ice skate on a sheet of the plastic without much damage to the plastic.

The price of a Hip replacement in Tunisia coupled with a week of recovery or vacation in a 5 stars hotel is at least % cheaper than the sole procedure in Europe and for the same medical quality.

Is a Cemented or Uncemented Prosthesis Better?

The choice of hip prosthesis, whether a cemented or uncemented, depends on the patient's condition, that's why a preoperative examination is essential with the surgeon to ask any questions and discuss the advantages and disadvantages of each artificial hip joint.

Cemented replacements are usually advised for older people with reduced activities and fragile bones, for example those who suffer from osteoporosis. However, uncemented prosthesis are generally recommended for younger and very active people.

Regarding the uncemented prosthesis, its main inconvenient relies on the recovery period. Indeed, the natural bone takes much time to grow and become part of the prosthesis. As a result, the patient, who has undergone an uncemented prosthesis, must minimize their activities up to 3 months. In addition, a thigh pain, during the first few months, may occur after the hip replacement surgery using an uncemented hip joint.

What Can Be Expected Immediately After Surgery?

The patient's movement will be limited immediately after hip replacement surgery. In addition, a pillow or a special device should be placed when the patient is in bed in order to maintain the hip in the correct position. Moreover, an intravenous solution will be put to replace fluids lost during the intervention, and a catheter may be used to drain urine right after the surgery until the patient will be able to use the bathroom. Besides, the doctor will prescribe medicine for pain or discomfort.

The same day of the hip replacement intervention or the next day, specialists will teach the patient a few exercises to improve their recovery. After two days approximately, the patient may be able to sit, stand and walk.

While the patient is still in the clinic, a physical therapist may teach them exercises such as contracting and relaxing certain muscles, which can strengthen the hip. Besides, as the new hip prosthesis has a limited movement compared to the natural one, the physical therapist will give the patient a few advices and exercises of the appropriate techniques to follow in their future daily activity such as sitting and bending.

How Long Are Recovery and Rehabilitation?

After hip replacement surgery, the patient will stay in the clinic no more than 8 to 10 days. The recovery period will take about 3 to 6 months depending on the surgery type and the patient's overall health.

After a hip replacement surgery, the person will notice a decrease in pain as well as an increase in mobility. In fact, they will lead a normal daily life activities, thus, an improvement in the quality of life.

In recent years, many advances have been made in terms of materials (ceramics, polyethylene, zirconium addition), techniques (dual mobility for example), to achieve performance (fixation to the bone, mobility, prevention of dislocation) and the life of the hip prosthesis. In the absence of complications, a hip prosthesis has a life span of 20 years on average. The all-ceramic prosthesis is unusable and is not used: it is placed in life and does not require re-intervention.

The appropriate exercises after a Total Hip Replacement surgery

Appropriate exercise can decrease stiffness and increase flexibility and muscle strength. Indeed, people who have hip prosthesis should talk to their doctor or physical therapist about developing a convenient exercise program. Besides, the surgeon or therapist will decide when you can swift from normal activities to a more demanding activities. First of all, the patient should start with safe range-of-motion activities and muscle-strengthening exercises. As a matter of fact, many doctors recommend preventing high-impact activities, such as basketball, jogging, and tennis in order to avoid damaging the new hip or causing the loose of its parts.

On the contrary, exercises such as walking, stationary bicycling, swimming, and cross-country skiing are advised during the first period. These exercises can increase muscle strength and cardiovascular fitness without breaking the new hip.

Advices before and after hip replacement intervention

Set up a recovery site at home by placing daily stuff at hand such as the television remote control, radio, telephone, etc in order to avoid reaching up or bending down. After the hip replacement surgery, it is important to follow the doctor's instructions and work with a physical therapist to improve the hip recovery and speed up the recovery period. Furthermore, it is essential to wear an apron when carrying things around the house which leaves hands and arms balanced or to use crutches.